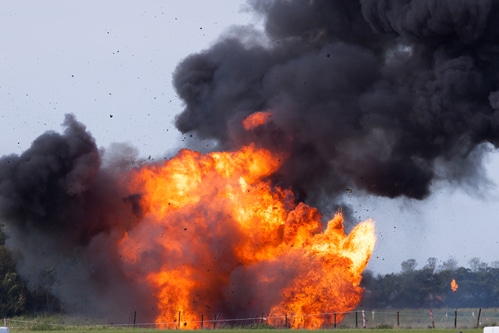 A massive 18 wheeler fire involving a FedEx truck closed down a section of Interstate 35 early Thursday morning. The truck was hauling a double set of trailers when it struck several concrete barriers in a busy freeway construction zone. Troopers with the Texas Department of Public Safety closed down the freeway for nearly eight hours as firefighters battled the 18 wheeler fire. The trainee driver and his trainer escaped the blaze with non-life-threatening injuries.

Details of the 18 Wheeler Fire

The 18 wheeler fire occurred just after 2 a.m. near the town of Salado, about halfway between Austin and Waco on I-35. According to a DPS trooper, the tandem trailer truck jackknifed after the truck hit a water puddle. The trainee driver lost control and one of the trailers collided with a concrete barrier. The driver and trainer escaped before the rig caught fire. The truck’s momentum and the slick road conditions were cited as reasons behind the 18 wheeler fire.

The truck in the 18 wheeler fire was reportedly carrying several cases of handgun and rifle ammunition. Witnesses reported hearing “pop-pop” noises as the 18 wheeler fire ignited the ammunition. The ammo included both .38 caliber and .50 caliber rounds. The truck was also carrying several pairs of boots for a local store. Firefighters from five different jurisdictions responded to the blaze. A witness told local reporters that firefighters needed to restock their water supplies at least twice before they could extinguish the blaze.

Accident investigators from the local DPS office are expected to probe into the causes of the 18 wheeler fire. Officials released statements from eyewitnesses showing that they saw the FedEx truck moving at a high rate of speed. A spokesman for the Texas Department of Transportation told reporters that his office would “be taking a look to see” if standing water and road conditions contributed to the 18 wheeler fire. Authorities did not release any information on the truck’s destination, nor why it was carrying several loads of ammunition.

Know Your Rights in an 18 Wheeler Accident Lawsuit
To find out how we can help you with an 18 wheeler accident lawsuit, contact us today at 888-751-7263. Our friendly staff will ask a few questions about your case and connect you to an attorney who can help with your 18 wheeler accident lawsuit. You can also fill out the “Free Case Evaluation” form at the top of this page.