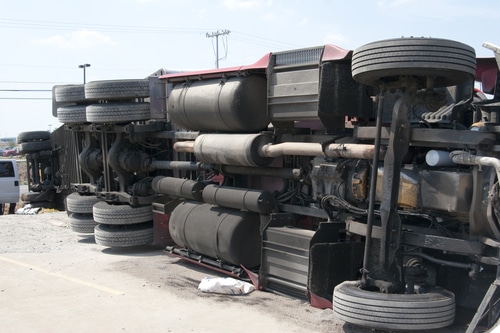 A U.S. Postal Service truck collided with a guardrail and caught fire early Sunday morning near Fort Worth. The fatal Texas truck wreck occurred on southbound Loop 820 at Highway 287. According to Fort Worth police, the truck driver was the only victim in the fatal Texas truck wreck. The driver reportedly lost control of his rig just before the truck’s cab struck a pillar on an overpass bridge. The truck overturned and caught fire with the driver trapped inside. Paramedics declared the driver dead at the scene.

Investigators with both the Fort Worth Police Department and the Teas Department of Public Safety are investigating the causes of the fatal Texas truck wreck. A Fort Worth Police Department spokesman told a local TV station that they “don’t know exactly why” the fatal Texas truck wreck happened. The officer said that they had yet to determine “it it was speed or just slick conditions” that caused the crash. A crew from the Texas Department of Transportation checked the bridge support for damage.

A fatal Texas truck wreck involving a gravel truck and two other vehicles occurred last Tuesday just south of Marble Falls. The fatal Texas truck wreck happened early Tuesday morning on U.S. 281 south of Texas 71. The gravel truck was traveling southbound when it rear-ended a 2001 Honda Accord as the car was slowing to make a left turn. Both vehicles swerved into oncoming traffic and struck a 2011 Ford F-250 pickup truck in the northbound lanes. The driver of the Honda died at the scene.

A young man lost control of his car and collided with an 18 wheeler in a fatal Texas truck wreck last week. The young man was driving a Honda Accord in the southbound lanes of U.S. 287 near Bowie when he sustained a tire blowout. He lost control of his vehicle and swerved into oncoming traffic. A Freightliner tractor trailer struck the Accord on the driver’s side. The young man driving the Accord was pronounced dead at the scene. Investigators with Texas DPS are searching for the causes of the fatal Texas truck wreck.

Know Your Rights in a Fatal Texas Truck Wreck Lawsuit