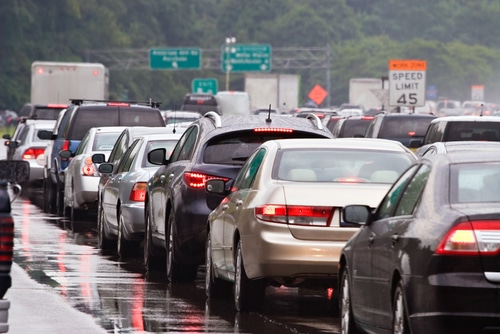 A series of I-35 truck accidents last week caused numerous injuries and several traffic delays on the busy freeway. The accidents included an incident in Dallas involving two 18 wheelers and a major fuel spill. Another I-35 truck accident in Waco involved a tractor trailer and two other vehicles on a rain-slicked highway. A FedEx 18 wheeler struck a retaining wall on the same freeway near San Marcos. A DPS trooper and a witness rescued a driver from a fiery 18 wheeler accident on I-35 near Temple.

Details of the Dallas I-35 Truck Accident

Two 18 wheelers were involved in a serious I-35 truck accident just north of Dallas early Sunday evening. The collision also caused a fuel spill that closed down traffic on the interstate from Lake Dallas to south Denton. Local police reported that one of the tractor trailers caught fire, but that the fire did not ignite the fuel spilled on the pavement. The driver of a passenger car was also injured in the I-35 truck accident. He was transported to a local hospital with non-life-threatening injuries.

Details of the Waco I-35 Truck Accident

Heavy rains and wet conditions were blamed for an I-35 truck accident near Waco last Wednesday morning. The driver of a Suzuki SUV struck a concrete wall, then spun out and collided with an 18 wheeler near the mile marker 334 exit. Police on the scene told local reporters that the SUV may have hydroplaned on the wet asphalt, which caused the driver to lose control of the vehicle. The SUV driver was taken to a local hospital with non-life-threatening injuries.

Details of the Temple I-35 Truck Accident

A FedExt truck caught fire and exploded in an I-35 truck accident near Temple early Thursday morning. A DPS trooper recorded the accident on his cruiser’s dashboard camera as he drove behind the 18 wheeler. Trooper D.L. Wilson told reporters that he saw the truck explode as flames rose 30 feet in the air. He went to the scene of the I-35 truck accident to rescue the driver, who was struggling to escape the burning cab. A witness who lived nearby helped the trooper pry the driver from the wreckage. The driver was transported to a local hospital with severe burns and three fractured vertebrae.

Details of the San Marcos I-35 Truck Accident

Another FedEx truck was involved in an I-35 truck accident last week. The incident occurred early Wednesday morning, when the delivery truck struck a center retaining wall near San Marcos. The collision caused the driver to lose control and strike a light post and clip a passenger vehicle. A hazardous materials cleanup crew was called to the I-35 truck accident site when local police reported a fuel spill from the truck. The truck driver was taken to a local hospital for minor injuries.

Know Your Rights in an I-35 18 Wheeler Accident Lawsuit