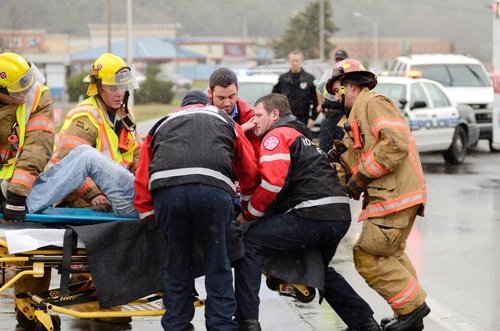 A Texas 18 wheeler accident north of Houston closed down the HOV lane of a major freeway. The tractor trailer was traveling southbound on U.S. Highway 59 when it vaulted over a concrete barrier and careened into the HOV lane. The Texas 18 wheeler accident involved five other vehicles, as the truck struck one vehicle, veered into the HOV lane, and collided with four more. The truck also spilled more than 200 gallons of gasoline onto the freeway, forcing police to close the highway while cleanup crews mopped up the spill.

A terrible Texas 18 wheeler accident occurred last Tuesday just south of Fort Worth. The accident left a man dead and a woman injured when a SUV collided with a tractor trailer. The Texas 18 wheeler accident happened on Interstate 35W late Tuesday night. According to police reports, a man driving his SUV struck the rear of an 18 wheeler. A minivan then collided with the SUV, causing it to catch fire. The man driving the SUV died at the scene. The woman in the minivan was transported to a local hospital.

The driver of a Chevrolet Camaro suffered life-threatening injuries in a Texas 18 wheeler accident near Corpus Christi. The accident occurred early Monday morning on Highway 286 and County Road 204. Reports from Texas Department of Public Safety troopers state that the Texas 18 wheeler accident happened when the Camaro driver attempted to pass the tractor trailer by moving into the oncoming traffic lane. The truck driver attempted to make a turn when the Camaro came back into the proper lane. The damage to the Camaro was so extensive, first responders had to use the Jaws of Life to remove the driver.

A driver involved in a Texas 18 wheeler accident was left trapped in his cab until police and fire department rescuers arrived. The accident happened late Monday afternoon near Interstate 35E and U.S. Highway 287. According to a report from the Waxahachie Police Department, the Texas 18 wheeler accident occurred when the driver “failed to control speed” on a cloverleaf interchange. The report also stated that the truck’s load shifted, causing it to flip onto its left side. Police removed the truck’s windshields and helped the driver out through the back windshield. The driver sustained minor injuries and was transported to a local hospital.

Know Your Rights in a Texas 18 Wheeler Accident Lawsuit